Many of you will recall that a fire broke out at our HQ office on the night of 5 Jan 2021. That night, the SCDF was activated and the fire was quickly contained. Fortunately, no one was in the office at the time of the incident and no one was hurt.

Based on the extent of the damage at that time, we thought the office would be closed for at least two months to facilitate cleaning and recovery efforts. The teams working at HQ were either relocated to our level 2 office or reverted to working from home. The one positive thing that arose out of the unfortunate fire, was that all of us were familiar with working from home, due to COVID-19.

For the safety of our patients, we suspended our Day Hospice services and affected Day Hospice patients were visited by our staff, at their homes instead. We reopened Day Hospice three weeks later, on 1 Feb 2021.

As part of recovery, we had to spend a lot of time with our insurers, vendors, contractors and our landlord to negotiate renovation plans. Our initial planned closure of two months became six months and then further stretched to become ten months. There were many reasons which affected the renovation plans. The damage due to the fire was far worse than we anticipated. In addition, Malaysia declared MCO restrictions, which added three months of delay. Our furniture was to be manufactured in Malaysia and with their twice extended MCO restrictions, our furniture could not be made nor delivered to us. In August, we worked with our contractor and decided to change the manufacture of the furniture to Singapore and we finally received the good news that renovations would be completed by October.

After 11 months, we will be moving in to our newly renovated office in the middle of November and each of us looks so much forward to sitting at our own desks.

In Dec 20, I had written “Precious Gems 55” – “It Only Takes a Spark to Get the Fire Going”. Trixie*, Glenda* and Gerard* had enriched HCA with a string of blessings. Following that, Trixie tried to persuade her surgeon to purchase one of the five paintings that Glenda had painted together with our patients. To her surprise, Trixie’s surgeon said he wanted to purchase the entire series. However, we had already sold two of them! Trixie then discussed with Glenda and Gerard and Glenda kindly agreed to commission another series of five paintings, to be done jointly with our patients. One good thing led to another and Trixie’s surgeon then decided that he would donate the new series of paintings back to HCA. He had heard about the fire and wanted the paintings to be displayed in our newly refurbished office, when completed. We could not ask for more. The five paintings will now have pride of place, on the wall at the entrance to our HQ office.

I can only count my blessings that we have such wonderful supporters. These include Trixie, Glenda and Gerard. But behind the scenes, I am most grateful for the perseverance of the REVIVE task force, who worked tirelessly immediately after the fire, fervently supported each other to get things together, so that there is still a semblance of a proper office, despite the inconveniences. Special mention must go to the operations team, led by our Operations “Superman”, who brought all the pieces together. We are finally moving back to our newly decorated HOME! 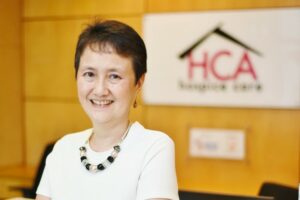