A Will of Iron

For Nurse Serene, the Ironman Triathlon seemed like an impossible endeavour but she drew strength from her patients, who never gave up on their dreams, no matter how impossible they may seem.
By Toh Wei Shi, HCA Community Relations 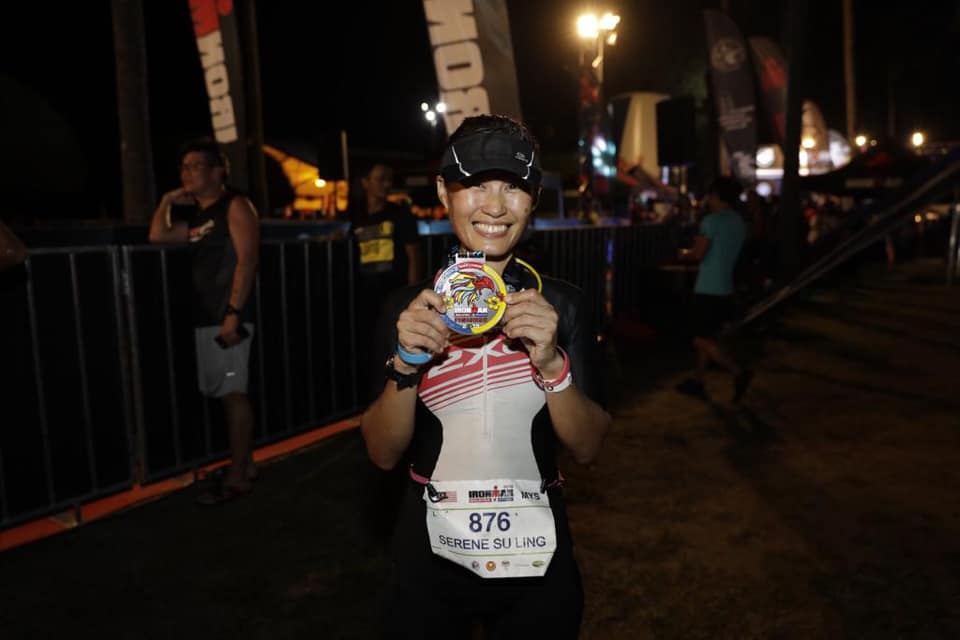 Late HCA Star PALS patient Mike*, 21, was determined to complete his National Service (NS) despite being afflicted with an aggressive tumour that enveloped his leg and affected his ability to walk.

“Mike was undergoing treatment for the cancer as well,” says HCA Star PALS Senior Palliative Care Nurse Serene Wong, who recently completed her first Ironman (IM) Triathlon. “The disease and subsequent therapy took a physical toll on him, but he still wanted to exercise, to complete what he had started.”

Mike’s spirit of perseverance was at the forefront of Serene’s mind when she made the decision to embark on the IM Triathlon to raise funds for HCA. “I decided on it last December – coincidentally, Mike’s birthday is on 1 January,” she shares.

The Ironman Triathlon – as its name might suggest – consists of a daunting 3.8km swim, a 180km bicycle ride and a 42km marathon, within a cut-off time of just 17 hours. There is no doubt the physical challenges are immense – but the mental barriers are much harder to conquer, making the endeavour seem impossibly difficult, as most athletes can attest to.

The path leading to the finishing line at the Ironman Triathlon in Langkawi.

Despite training consistently for months before the IM Triathlon, Serene was doubtful of her ability to complete the race. “During training, I was exhausted after just five to six hours of cycling, so I didn’t think I would be able to get to the end,” she says.

In the months before the IM Triathlon in October, Mike’s condition started to deteriorate rapidly. His eventual passing weighed on Serene’s mind, but his resilience in the face of cancer and death imbued her with strength as she geared up for the IM Triathlon in Langkawi.

Lessons from the Kids

American writer Christopher Moore once said, “Children see magic because they look for it.”

The perceptions of children are the purest distillation of simplicity, untainted by the distractions that often come with age. For Serene, her patients are her biggest inspiration. Late Star PALS patient Missha* was only four years old when she was diagnosed with a brain tumour. The little girl was in the consultation room when the doctor broke the news to her mother, taking care to word the diagnosis as sensitively as possible.

Later on, Missha’s mother gently asked if she knew what was going on. Her calm and straightforward response came as a surprise to all: “I have a brain tumour and I will die soon.”

“Missha understood life and death from the documentaries she watched on National Geographic and she readily accepted reality,” Serene shares. “Her understanding actually helped her parents come to terms with her condition and to face the inevitable together.”

“Her life was brief but it was a celebration of every moment, while it lasted.”

Serene was filled with apprehension when she saw the other contestants and their top-notch gear. “They were all so fit and trim and they had professional bikes too – in my case, both the person and the bike were ‘suboptimal’,” she laughs. Getting ready for the warmup session.

Serene’s nervousness peaked when she sustained a cut during the initial warm-up in the shallow waters near the shore, but the adrenaline quickly took over as she swam across the sea on the first leg of the triathlon.

The second leg of the triathlon, the 180km bicycle ride, was harrowing for Serene. “I could not imagine cycling for eight hours straight, but I decided to switch my attention to the beautiful scenery surrounding me – paddy fields, mountains and the sea,” she shares. “I thought of my patients and how wonderful it would be if they could see the scenery too.” The final 42km marathon turned out to be the toughest as the race stretched on into the dark of the night. “It was a looping route near the airport and it became increasingly mentally challenging as it was also dark and cold,” Serene says.

“But I thought to myself, ‘As long as I keep moving, I’ll reach the finishing line.’”

It was a hard-won victory as Serene crossed the finishing line, 15 hours, 44 minutes and 34 seconds after she first began. Her fundraiser on giving.sg, has also exceeded its initial target of $5,000, totalling over $12,000 to date.

“My patients have taught me not to be afraid to dream big. Thinking about them gives me strength to persevere.”